Sikh mostly originate from Punjabi (north india) and punjabi weddings take place in a Gurudwara “the doorway to the Guru” which is a Sikh place of worship (temple).

Sikhs have many traditions which are held before the wedding ceremony and are customary to be carried out.

During the Kurmai, the bride’s relatives bring objects for the groom which are believed to be good omens:- “kara” (metal bracelet), traditional sweets, coconut, “chhuhare” (dry dates), sugar and money.

“Maiya” is a traditional belief stating that the bride and groom are not allowed to leave their homes or and to be dressed in simple clothes for a few days before the wedding. During this time scented powder “vatna” is applied on the bride’s and groom’s body. The powder is made of barley flour, turmeric and mustard oil. This is done to make the girl and boy look more beautiful on the special day of their life. After that there is a ritual bath. This ritual demands that the bride and groom to stay at home in their old clothes for a couple of days before their wedding.On the evening of the wedding or as Sikhs would say “mehndi” the henna tattoo is made on bride’s hands and feet. For the bride the mehndi is sent by the future Mother in Law, which is beautifully decorated. Other ladies who are friends and family also apply mehndi on their hands.

“Gana” is a red thread tied to the groom’s right wrist and the bride’s left wrist. All guests present at the celebration also are given a gana to wear to represent the wedding.

There is a sangeet function hosted by the girl’s family, in which just a few close members of the groom’s family are invited. The bride’s family play the dholak drums and sing songs in which they tease the groom and his family. Nowadays, people hire DJs and have a dance party, followed by dinner. A ladies sangeet is held for the bride and her bridesmaids.

The night before the wedding the Bride’s maternal uncle or “mama” takes the bride through the “chooda” ceremony. This is when she wears a “chooda” or set of red and white bangles. These bangles have been dipped in “kachchi lassi” or buttermilk. The tradition is to wear 21 bangles, but today most brides wear 7 or 9 bangles. Today the bride wears the chooda for month and a quarter. Traditionally it would be for at least a year. Bride’s close female relatives tie “kaleeren” or golden metal danglers to the bride’s wrist.

Jaggo is another ceremony where the family dances and sings in the beautifully decorated wedding home. Jaggo is celebrated in the last hours of the night. They decorate copper or brass vessel called “khadaa” with diveh (clay lamps) and fill them with mustard oil and light them. The bride/bridegrooms maternal aunt (mammi) carries it on her head, and another lady will have a long stick with bells, and she will be shaking it. The ladies will then go into other friends and families homes and be welcomed by sweets and drinks, they will then dance there and move on. It is a loud ceremony, filled with joy, dancing, fireworks, and food. 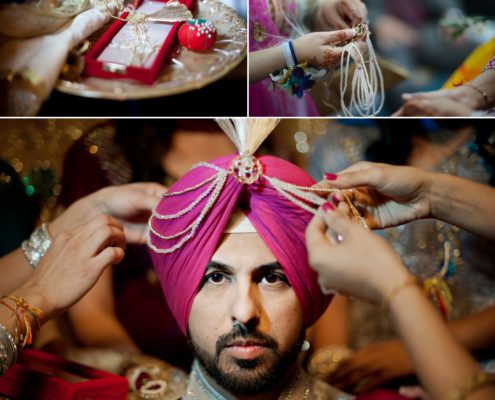 “Sehrabandi” is held in the groom’s home on the morning of the wedding. The Groom’s sister ties a “sehera” or ceremonial floral veil to the groom’s forehead. Traditionally Sikh groom must wear a turban, sehra and carry a sword. After the completion of Sehrabandi ceremony, all those who witness the function give gifts and cash to the boy as a token of good luck.

The groom is accompanied by “sarvala”. The sarvala is a single younger brother or friend who “protects” the groom and stays by the groom throughout the wedding ceremony.

Varna is a ceremony that is supposed to ward off the evil eye. The groom’s bhabi (brother’s sister) lines his eyes with surma (kohl). 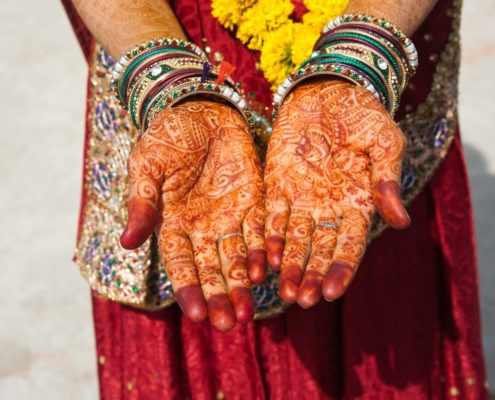 The Ghori Chadna is the final ceremony at the groom’s place. The groom’s sisters and cousins feed and adorn his mare. To ward off the evil eye, people use cash and perform the Varna The cash is then distributed among the poor. After this the boy climbs the horse and leaves his home for the wedding venue.

Both families gather at the “milini” ceremony held at the Gurdware on the morning of the wedding. All the elders of both families meet and embrace each other. Special breakfast is served. While the procession is entering the Gurudwara shabads (devotional songs) are sung.

The wedding ceremony or Anand Karaj is held in the morning of the wedding day in the Gurudwara. The ceremony starts with the singing of “kirtan” (first hymns) by the bride and groom sitting in front of the Guru Granth Sahib. In these hymns God is asked to keep this ceremony pure.

Then the bride and groom chant a prayer. What follows is the ceremony of Anand Karaj performed by the “granthi” (Sikh priest). The ceremony includes readings from the writings of the fifth Sikh guru, Guru Arjun Dev which is in four parts.

The main “topics” of this parts are matters of karma, dharma or faith and blessing. After each part the bride and groom bow to the Guru Granth Sahib and then circle around it. This act is called “lavan”. Then there is a performance of the “Ardaas” and “Shukrana” prayers. The wedding ceremony ends with “Hukunama” or proof statement of the marriage showing that everything was done in a proper manner.

“Juti Chupai” is a funny tradition held during the wedding ceremony. Girls from the bride’s family try to steal groom’s shoes and hide them. Subsequently, the boys from the groom’s family try to prevent it. The girls usually succeed when the groom takes off his shoes before sitting down in front of the Guru Granth Sahib. To get his shoes back the groom gives the girls rings called “kaleechris” and some money.

After the wedding ceremony the lunch is provided by the bride’s family which includes food, dance and entertainment until the evening.

“Doli” is what follows next. The groom goes to the bride’s formal home, the groom and baraat get ready to leave with the bride from her formal home. Everyone by this point are full of emotions. The bride is going to a new home and leaving her old life behind.

The bride and groom leave in a decorated car. To show love and support to the couple, the bride’s brothers push the car as long as they can.

The groom’s mother welcomes the bride in groom’s home. She does it by waving of a special bowl held in a bed of jamun leaves or grass over the heads of bride and groom. She sips from it until the groom asks her to stop.

As an act of welcoming, a mustard oil is poured at the entrance door. She enters the house. She is welcomed by relatives, friends and neighbours. Each of them feeds her with some “laddoo” (laddu) sweets. They also give her some money or “Mukh Dekhai”. As part of Mukh Dekhai she gets some jewellery by the groom and his mother. 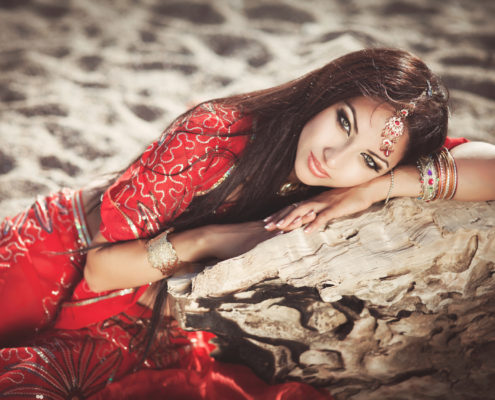 Day After the Wedding

On the next day the couple first go to the Gurdwara to pay their respects together as a married couple. Then they go to the bride’s parents home, this tradition is called “Phera”. Special meal is prepared by the bride’s family for the newly married couple and her new family. Both the bride and groom get some presents and is an opportunity for the two family to meet and greet.

Sikh wedding are a massive family event that involves many family members in all the traditions and rituals that need to be carried out. Family is a very big part of the whole Sikh wedding which goes on for weeks before the actual wedding day

Disclaimer : Views and comments gathered and published in this page are through the research conducted as a part of the community project by volunteers and may be sourced from other websites, documents and material. They do not represent the views of Apna Virsa or any associates in any way.